The gods of Plato

In the Republic, where Plato develops his soul - city analogy, Plato never mentions that the three parts of the soul correspond to the three main goddesses that Homer talks about. They have the same roots, though. Gods and Goddesses can not only convince individuals to obey them, groups and whole communities can be under their influence. See here. In the Laws he goes a bit deeper into the theory of how he sees the gods. He calls it (or them) soul (Psychē) but we can be sure he means the same thing.

This is of course some distance away from Homer's gods. But the main feature, their moving us, is unchanged. Thus, they are forces or we could also say powers. In the previous page we saw the domains of these forces. Homer makes it clear that they can act on both individuals and groups such as communities or armies. It should also be clear that the Greek gods move us as well as what we call the natural world (stars, planets, the weather etc.). Homer is interested mostly in their acting on humans. This may seem strange to us, equating gods with what we see as mental urges, as psychological phenomena. But if we compare it to our view of God, the Christian God, it is not that different. We have one God, one power who tells us what to do if He so chooses. We have anthropomorphised that power although we do not believe that can be literally correct. The Greeks distinguished three (main) powers which tell us what to do if they so choose. They also anthropomorphised those powers. These powers are beyond our control - we can only pray to them, put our faith in them, but they remain unpredictable. But if they do speak to us, we had better obey. For the step from three to one - in European thought(1) - we have to thank one man in particular: Plato. He philosophically merged the three into one and tried to cleanse them of the worldly muddiness and very human partiality that they show in Homer.
Plato develops this into his theories of the three parts of the human soul, and the three classes of people: the desiring class, i.e. the common people or 'money-earners', the aristocracy or guardians and the reasonable part, the ruler(s) or philosopher-kings.

Below is a visualization of the theory. It is somewhat simplified compared to the examples in Plato's writings but I believe this is his starting point. See e.g. Rep. 433B and the Philebus dialogue. Here he says that if we have found our "σωφροσύνης καὶ ἀνδρείας καὶ φρονήσεως", i.e. moderation, courage and prudence (the tamed versions of B, G and T) then what we have left is Justice. In other words: if an act is all three of these, then it must also be just.

Zeus is supposed to be in charge. He boasts of being stronger than all the other gods together but appears to avoid putting it to the test. See 'the golden rope', Il. 8.19. Hera is number two though she wants more, Athena is Tritogeneia, third-born (just as Zeus became first-born) and Aphrodite is fourth, though sometimes stronger than Zeus himself. 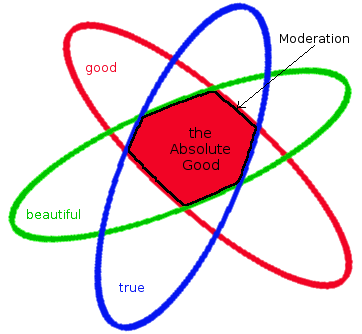 The solid red part is our Nomos, its border is Sophrosyne (moderation)


Note that there is some level-confusion about Sophrosyne (moderation)(1). In the text of Rep. 433B he uses the word as a limit only of the sensual desires, Aphrodite or the desiring part of the city. In other places (e.g. Charm 161B) he defines it the way Justice is defined here: doing one's own thing. In the picture above, moderation is the limit of the intersection of the three domains. This means, in Plato's view: Moderation is Justice. So what we have here is a bound Kronos: all gods in one but bound by moderation. Zeus has disappeared.